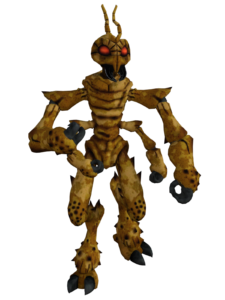 +2 Dexterity, +2 Wisdom, -­1 Charisma: Thri-­kreen are fast, but their alien mindset makes it difficult for them to relate to humanoids; furthermore, their “clutch–mind” instincts leave them with a poor sense of themselves as individuals.
Monstrous Humanoid: Thri-­kreen are not subject to spells or effects that affect humanoids only, such as charm person or dominate person.
Medium: Thri-­kreen receive no advantages or penalties due to size.
Swift: Thri-­kreen base land speed is 40 feet.
Darkvision: 60 feet.
Sleep Immunity: Thri-­kreen do not sleep, and are immune to sleep spells and similar effects. Thri-­kreen spellcasters and manifesters still require 8 hours of rest before preparing spells.
Natural Armor: Thri-­kreen have a +3 natural armor bonus to AC due to their naturally tough and resistant chitin. This bonus does not stack with the AC bonus provided by armor.
Non-­humanoid shape: Due to their six-­limbed forms, thri-­kreen cannot easily wear armor designed for four-­-limbed creatures. Armor can be converted to fit a thri-­kreen by spending an additional 50% of its cost.
Multiple Limbs: Thri-­kreen have four arms, and thus can take the Multiweapon Fighting feat (Bestiary) instead of the Two-­Weapon Fighting feat. Thri-­kreen can also take the Multiattack feat. (These are not bonus feats).
Natural Weapons: Thri-­kreen may make bite and claw attacks as a full round action. Their primary claw attack does 1d4 points of damage for each of their four claws. Their secondary bite attack, deals 1d4 points of damage, and has a chance to poison. A thri-­kreen can attack with a weapon (or multiple weapons) at its normal attack bonus, and make either a bite or claw attack as a secondary attack (at a -5 penalty).
Leap (Ex): At 3rd level, a Kreen adds his HD to all Acrobatics checks made to jump, both for vertical jumps and horizontal jumps. In addition, he always counts as having a running start when making jump checks using Acrobatics. By spending 1 Power Point as a swift action, a thri-­kreen gains a +20 bonus on Acrobatics checks made to jump for 1 round.
Poison (Ex): Starting at 7th level, a mature thri-­kreen delivers its poison (Fortitude save DC 11 + Con modifier) with a successful bite attack. A thri­-kreen produces enough poison for one bite per day.
Thri-­Kreen Poison Bite: Type poison, injury; save Fort DC 11 + Thri-Kreen con mod; frequency 1/round for 4 rounds; effect 1d3 Dex and paralyzed 1 min.; cure 1 Fort save.
Weapon Familiarity: To thri-­-kreen, the chatkcha and gythka are treated as martial rather than exotic weapons. These weapons are more common among thri-­-kreen than among other races.
Desert Craft: Thri kreen have a +4 racial bonus on Stealth checks in sandy or arid areas.
Psi-­like Abilities: 3/day – chameleon, know direction; and, at 7th level: 1/day – greater concealing amorpha, metaphysical claw. These abilities are manifested as a psychic warrior of half the thri-­kreen’s hit dice, rounded down (minimum 1).
Automatic Languages: Kreen. Bonus Languages: Tyrian (Common), Dwarven, Elven, Halfing, and Giant.

Thri-kreen are the strangest of the intelligent races of the Tablelands. These insectoid beings possess a mindset very different from any humanoid being encountered. They roam the wastes in packs, hunting for food day and night, since they require no sleep. Thri-kreen are quick and agile and make fearsome fighters, feared throughout the wastes.

Mature Thri-kreen stand about 7 feet tall, with a rough body length of 11 feet. Their four arms end in claws; their two legs are extremely powerful, capable of incredible leaps. However, kreen are unable to jump backwards. Their body is covered with a sandy– yellow chitin, a tough exoskeleton that grants the Thrikreen protection from blows. Their head is topped with two antennae, and their two eyes are compound and multifaceted. The kreen mouth consists of small pincers. Male and female Thri-kreen are physically indistinguishable. Thri-kreen usually do not wear clothing, but wear some sort of harness to carry weapons and food. Many wear leg or armbands, or bracelets. Some attach rings on different places on their chitin, though this requires careful work by a skilled artisan.

No Thri-kreen settlements exist in the Tyr region; kreen encountered there are either small packs of kreen, or else adventuring with humanoids. To the north of the Tyr region, beyond the Jagged Cliffs, past the Misty Border, lies the Kreen Empire. This great nation of kreen rules the Crimson Savanna, forming great citystates that rival the humanoid city-states of the Tyr region.

Most Thri-kreen are lawful, since the hive mentality is ingrained in their beings. Kreen that deviate from this mentality are rare.

Thri-kreen hatch from eggs. All those who hatch at the same time form what is called a clutch. Thri-kreen gather in packs that roam the wastes. Each pack consists of several clutches that roam over an area that the pack considers theirs to hunt on. There are no permanent thrikreen communities.

Clutches and packs are organized along strict order of dominance. The toughest member is leader; the second most powerful is second in command and so forth. A thrikreen can challenge a superior for dominance initiating a contest. The contestants fight until one surrenders or dies. Afterwards, the matter is considered settled and there are no lingering resentments between victor and loser. The pack-mates take the view that the challenger was only acting to strength the pack.

Thri-kreen are obsessed with hunting. They are carnivores, but seldom hunt intelligent life for food. They do have a taste for elf, which gives them a bad reputation amongst Elven tribes. When not hunting, they craft weapons, teach their young, and craft sculptures. The pack mentality is so ingrained in the culture that thri-kreen apply it to every situation. Thri-kreen feel compelled to be part of a clutch and will accept members of other races as clutch-mates.