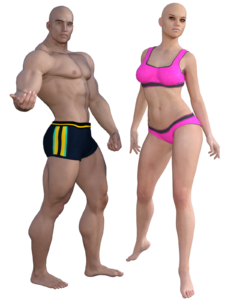 +2 Constitution, +2 Strength, and -1 Charisma: Born of two peoples Muls inherit the robustness of Dwarves. Though they are often bred for strength, player character Muls inherit the variability of humankind. However, their status as bred slaves deprives them of opportunities for intellectual development.
Humanoid (dwarf): Muls are humanoid creatures with the dwarf subtype.
Medium: As Medium creatures, muls have no bonuses or penalties due to size.
Normal Speed: Mul base land speed is 30 feet.
Darkvision: Muls can see in the dark up to 60 feet. Darkvision is black and white only, but is otherwise like normal sight, and muls can function just fine with no light at all.
Tireless: Muls get a +4 racial bonus to checks for performing a physical action that extends over a period of time (running, swimming, holding breath, and so on). This bonus stacks with the Endurance feat. This bonus may also be applied to savings throws against spells and magical effects that cause weakness, fatigue, exhaustion or enfeeblement.
Extended Activity: Muls may engage in up to 12 hours of hard labor or forced marching without suffering from fatigue.
Incredible Toughness: 1/day a Mul may remove one of the following conditions: Fatigued, Sickened or Dazed as an immediate action.
Dwarven Blood: For all effects related to race, a mul is considered a dwarf. Muls, for example, are just as vulnerable to effects that affect dwarves as their dwarf ancestors are, and they can use magic items that are only usable by dwarves.
Nonlethal Damage Resistance 1/–: Muls are difficult to subdue, and do not notice minor bruises, scrapes, and other discomforts that pain creatures of other races.
Automatic Language: Tyrian (Common). Bonus Languages: City-State Languages, Dwarven, Elven, and Giant.

Born from the unlikely parentage of dwarves and humans, muls combine the height and adaptable nature of humans with the musculature and resilience of dwarves. Muls enjoy traits that are uniquely their own, such as their robust metabolism and almost inexhaustible capacity for work. The hybrid has disadvantages in a few areas as well: sterility, and the social repercussions of being created for a life of slavery. Humans and dwarves are not typically attracted to each other. The only reason that muls are so common in the Tablelands is because of their value as laborers and gladiators: slave–sellers force– breed humans and dwarves for profit. While mul– breeding practices are exorbitantly lucrative, they are often lethal to both the mother and the baby. Conception is difficult and impractical, often taking months to achieve. Even once conceived, the mul takes a full twelve months to carry to term; fatalities during this period are high. As likely as not, anxious overseers cut muls from the dying bodies of their mothers.

Second only to the half-giant, the mul is the strongest of the common humanoid races of the tablelands. Muls grow as high as seven feet, weighing upwards of 250 pounds, but carry almost no fat at all on their broad muscular frames. Universal mul characteristics include angular, almost protrusive eye ridges, and ears that point sharply backwards against the temples. Most muls have dark copper–colored skin and hairless bodies.

As a collective group, muls have no lands to call their own. Occasionally, escaped muls band together as outlaws and fugitives, because of their common ex–slave backgrounds, and because their mul metabolism makes it easier for them to survive as fugitives while other races cannot keep up. Almost without exception, muls are born in the slave pits of the merchants and nobles of the city-states. Most are set to work as laborers, some as gladiators, and fewer yet as soldier–slaves. Very few earn their freedom, a greater number escape to freedom among the tribes of ex–slave that inhabit the wastes.

Muls tend towards neutrality with respect to good and evil, but run the gamut with respect to law or chaos. Many lawful muls adapt well to the indignities of slavery, playing the game for the comforts that they can win as valued slaves. A few ambitious lawful muls use the respect won from their fellow–slaves to organize rebellions and strike out for freedom. Chaotic muls, on the other hand, push their luck and their value as slaves to the breaking point, defying authority, holding little fear for the lash.

Muls have no racial history or a separate culture. They are sterile and cannot reproduce, preventing them from forming family groups and clans. The vast majority of muls are born in slavery, through breeding programs. Often the parents resent their roles in the breeding program and shun the child, leaving the mul to a lonely, hard existence. The taskmaster’s whip takes the place of a family. For these reasons, many muls never seek friends or companionship, and often have rough personalities with tendencies towards violence.

The mul slave trade is very profitable, and thus the breeding programs continue. A slave trader can make as much on the sale of a mul as he could with a dozen humans. As slaves, a mul has his profession selected for him and is given extensive training as he grows. Mul gladiators are often very successful, and win a lot of money for their owners. Highly successful gladiators are looked after by their owners, receiving a large retinue of other slaves to tend to their whims and needs. This has lead to the expression, “pampered like a mul,” being used often by the common folk.

Muls not trained as gladiators are often assigned to hard labor and other duties that can take advantage of the mul’s hardy constitution and endurance.