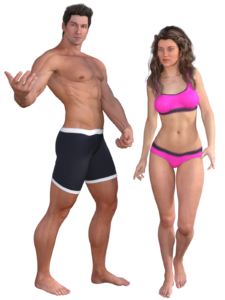 It’s hard to make generalizations about humans, but your human character has these traits.
Ability Score Increase: Your ability scores each increase by 1.
Age: Humans reach adulthood in their late teens and live less than a century.
Alignment: Humans tend toward no particular alignment. The best and the worst are found among them.
Size: Humans vary widely in height and build, from barely 5 feet to well over 6 feet tall. Regardless of your position in that range, your size is Medium.
Speed: Your base walking speed is 30 feet.
Languages: All humans speak and understand Tyrian (Common) and one extra language of the character’s choice.

While not the strongest race, nor the quickest, humans have dominated the Tablelands for the last three thousand years.

Humans can be found anywhere, from the great city-states of the Tablelands to the hovels of the barren wastes.

Humans have no racial tendency toward any specific alignment.

Human society varies greatly from city-state to city-state, with even more alien ways of life found beyond the grip of the sorcerer-kings.