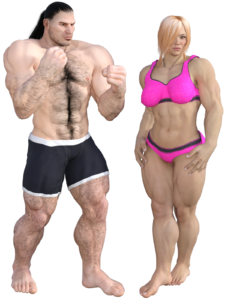 +2 Strength, +2 Constitution, -1 Intelligence: Half-­giants are incredibly strong and hardy, but are also slow-­-witted and find maneuvering difficult due to their impressive size.
Humanoid (giant): Half-­giants are humanoid creatures with the giant subtype.
Medium Size: Half-­giants are medium-­-sized creatures but are subject to the special rules below on account of their greater size.
Normal Speed: Half-­giants have a base speed of 30 feet.
Low-­Light Vision: Half-­giants can see twice as far as humans in conditions of dim light.
Powerful Build: The physical stature of half-­giants lets them function in many ways as if they were one size category larger. Whenever a half-­giant is subject to a size modifier or special size modifier for a Combat Maneuver Bonus or Combat Maneuver Defense (such as during grapple checks, bull rush attempts, and trip attempts), the half-­giant is treated as one size larger if doing so is advantageous to him. A half­-giant is also considered to be one size larger when determining whether a creature’s special attacks based on size (such as improved grab or swallow whole) can affect him. They also are considered large for the purposes of their carrying capacity (i.e. x 2 carrying capacity). A half­-giant can use weapons designed for a creature one size larger without penalty. However, his space and reach remain those of a creature of his actual size. The benefits of this racial trait stack with the effects of powers, abilities, and spells that change the subject’s size category.
Big Britches: Half-­giants have greater girth than most other medium-­sized humanoids and find it hard to fit into armor and clothing designed for medium creatures. Half­-giants are treated as Large creatures for the purposes of determining what they can wear, including how much it costs and weighs.
Large and in Charge: Half­-giants are very unstable and can be very intimidating, gaining a +2 bonus to their Intimidate skill to smaller creatures. As humanoids with the giant sub-type, half-giants treat Intimidate as a class skill.
Looming Presence: Due to their greater-­than-medium build, half-­giants incur a -­2 penalty to Stealth checks.
Large appetite: Half-giants also require lots of food and water to sustain their massive stature and take twice the amount of food and water that normal medium creatures require.
Axis Alignment: One aspect of the half-giant’s alignment must be fixed, and chosen during character creation. The other half must be chosen when they awake each morning. They are only bound to that alignment until they sleep again. For example, a half-­giant may have a fixed lawful alignment. Every morning, he must choose to be lawful good, lawful neutral or lawful evil. This alignment change is not mandatory.
Automatic Language: Tyrian (Common). Bonus Languages: City-State Languages, Dwarven, Giant and Gith.

Legend has it that in ages past, a sorcerer-queen used wizardry to beget a union of giant and human in order to create a race of powerful slaves. Whatever the truth of this legend, the half-giant race has increased in number and is now fairly common especially in human controlled lands near the shore of the Sea of Silt. Half-giants gain great strength, but dull wits, from their giant heritage, and are nearly as agile as their human forebears.

Physically, the half-giant is enormous, standing about 8-9 feet tall and weighing around 600 pounds. Half-giants have thick hair, which is often kept braided (especially among females) or in a single tail that hangs behind the head and down the back. They dress in garb suitable to their occupation or environment. Half-giants mature at about 24 years of age and can live about 170 years.

Half-giants are most often found in the city-states, serving as gladiators, laborers, soldiers, and guards. A few half-giants collect into wilderness communities, often adopting the culture and customs of neighboring beings. The rare half-giant community often attaches itself to a charismatic or successful leader (not necessarily a half-giant) who demonstrates the tendencies they admire.

Half-giants can switch attitudes very quickly, taking on new values to fit new situations. A half-giant whose peaceful farming life is disrupted by marauders may soon adopt the morals of the renegades who sacked his village. A half-giant’s nature is to switch his alignment aspect to imitate or otherwise react to a significant change around him.

A relatively young race, half-giants possess very little cultural identity of their own. Instead they adopt the customs and beliefs of the cultures in which they live. Because of this, half-giants routinely change their alignment to match who most influence them.

Half-giants can be found from one end of the Tablelands to the other, and often congregate in or near other population centers, absorbing the culture. Rarely do half-giants form communities of their own.

Unlike some other bastard races, half-giants can reproduce. A single offspring is produced from half-giant unions after almost a year of pregnancy.

Though omnivorous, half-giants are tremendous consumers of water and food. They require twice the amount of food and water than humans. Clothing and equipment need twice the material to construct to fit a half-giant, leading to higher prices for half-giants.

Half-giants tend to damage objects and buildings around them through accidents of size alone. Some considerate half-giants camp outside city walls to avoid causing too much damage, but the draw of a city’s culture and the below average intellect of most half-giants limits the number of half-giants who do so.