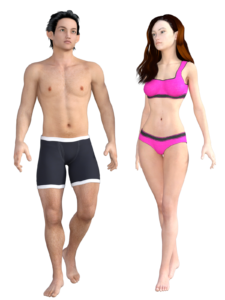 Your half-elf character has some qualities in common with elves and some that are unique to half-elves.

Ability Score Increase: Your Charisma score increases by 2, and two other ability scores of your choice increase by 1.
Age: Half-elves mature at the same rate humans do and reach adulthood around the age of 20. They live much longer than humans, however, often exceeding 180 years.
Alignment: Half-elves share the chaotic bent of their elven heritage. They value both personal freedom and creative expression, demonstrating neither love of leaders nor desire for followers. They chafe at rules, resent others’ demands, and sometimes prove unreliable, or at least unpredictable.
Size: Half-elves are about the same size as humans, ranging from 5 to 6 feet tall. Your size is Medium.
Speed: Your base walking speed is 30 feet.
Darkvision: Thanks to your elf blood, you have superior vision in dark and dim conditions. You can see in dim light within 60 feet of you as if it were bright light, and in darkness as if it were dim light. You can’t discern color in darkness, only shades of gray.
Elf Blood: You have advantage on saving throws against being charmed, and magic can’t put you to sleep.
Skill Versatility: You gain proficiency in two skills of your choice.
Keen Senses: Half-elves receive a +2 racial bonus on Perception skill checks.
Child of Two Worlds: Half-elves gain a +2 racial bonus to Deception checks when impersonating elves or humans.
Tablelander: +2 racial bonus on all Survival. Half-elves spend a lot of time in the wilds of the tablelands.
Languages: Half­-elves begin play speaking Tyrian (Common) and Elven. Half-elves with a high Intelligence score can choose from any languages they want (except secret languages, such as Druidic).

Unlike the parents of muls, elves and humans are often attracted to each other. Half-elves are typically the unwanted product of a casual interracial encounter.

Averaging over six feet tall, half-elves combine Elven dexterity with human resilience. Bulkier than elves, most half-elves find it easier to pass themselves off as full humans than as full elves, but all have some features that hint at their Elven heritage.

Despite their unique nature, half-elves don’t form communities. The few half-elves that settle down tend to live among humans who, unlike elves, at least find a use for them.

Lawful and neutral half-elves labor for acceptance from a parent race, while chaotic ones have given up on acceptance, electing instead to reject the society that has rejected them.

Unlike other races, half-elves do not consider themselves a separate race, and, with very few exceptions, do not try to form half-Elven communities. A half-elf’s life is typically harder than either a human’s or an elf’s. It is difficult for half-elves to find acceptance within either Elven or human society. Elves have not tolerance for those of mixed heritage, while humans do not trust their Elfish side. On the whole, humans are far more tolerant of halfelves than elves, who often refuse to allow such children into their tribes, and are likely to cast the half-elf’s mother from the tribe as well.

Most half-elves consider themselves outsiders to all society and tend to wander throughout their entire lives, going through life as an outsider and loner. Half-elves are forced to develop a high level of self-reliance. Most halfelves take great pride in their self-reliance, but this pride often makes half-elves seem aloof to others. For many half-elves the detachment is a defensive mechanism to deal with a desire for acceptance from either human or Elven society that will likely never come. Some half-elves turn to the animal world for company, training creatures to be servants and friends.