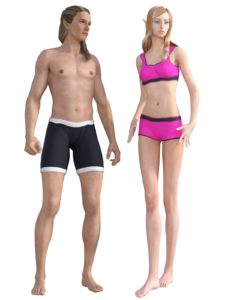 Your elf character has a variety of natural abilities, the result of thousands of years of elven refinement.

Ability Score Increase: Your Dexterity score increases by 2 and your Constitution by 1.
Age: Although elves reach physical maturity at about the same age as humans, the elven understanding of adulthood goes beyond physical growth to encompass worldly experience. An elf typically claims adulthood and an adult name around the age of 100 and can live to be 750 years old.
Alignment: Elves love freedom, variety, and self- expression, so they lean strongly toward the gentler aspects of chaos. They value and protect others’ freedom as well as their own, and they are more often good than not. The drow are an exception; their exile has made them vicious and dangerous. Drow are more often evil than not.
Size: Elves range from 6 to 7 feet tall and have slender builds. Your size is Medium.
Speed: Your base walking speed is 40 feet.
Darkvision: Accustomed to twilit forests and the night sky, you have superior vision in dark and dim conditions. You can see in dim light within 60 feet of you as if it were bright light, and in darkness as if it were dim light. You can’t discern color in darkness, only shades of gray.
Keen Senses: You have proficiency in the Perception skill.
Temperature Resilience: Elves have a natural resistance to extreme temperatures and aren’t adversely affected by the heat of the day or the chill of the night. They treat extreme heat or cold as if it were only very hot or cold, but suffer normally from abysmal heat, or from magical supernatural heat and cold.
Desert Craft: Elves have a +2 racial bonus on Stealth checks in sandy or arid areas.
Elf Run: After a minute of warm–up and a Constitution check (DC 8 + Character Level + Charisma modifier), elves can induce an elf run state. This state allows elves to hustle for long distances as easily as a human can move normally, and run for long distances as easily as a human can hustle. Each day that an elf continues the elf run, he must make 6 additional Constitution checks to maintain his elf run state: A trivial check (DC 5) on the second day, an easy check (DC 10) on the third day, an average check (DC 15) on the fourth day, a difficult check (DC 20) on the fifth day, and an heroic check (DC 25) on the sixth day. Once the elf fails his Constitution check, he loses the elf run benefits and suffers normal penalties for extended hustling and running. After a full day’s rest, the elf may attempt again to induce an elf run state. With a group of elves, runners add their leader’s Charisma bonus both to their movement rate and to any Fortitude checks related to movement.
Automatic Languages: Tyrian (Common) and Elven. Bonus Languages: City-State Languages, Dwarven, Aarakocran, Kreen, Gith, Ssuran, and Primordial

Athasʹ deserts, plains, steppes and badlands are home to the elves, a long–limbed race of trading, raiding, thieving sprinters. Running is the key to acceptance and respect among elves. Elves that are injured and cannot run are often left behind to die.

Elves stand between 6 and 7 feet tall, with lean builds; angular, deeply etched features; and no facial hair. They dress in garb designed to protect from the desert and elements.

Always at home when running in the wastes, elves often act as if all plains and badlands were Elven lands. However, since most elves are loath to settle or build, they can rarely enforce their claims. Elven tribes make a living either through herding, raiding or trading; most tribes have at one time or another plied their hand at all three of these occupations. A tribes current occupation usually determines which lands they currently claim as their own. Elven herders claim grazing lands. Elven raiders claim lands crossed by trade routes. Elven traders claim no lands, but wander in search of bargains and loose purses.

Elves tend towards chaos because of their love of freedom, variety and self–expression. With respect to good and evil, elves tend towards neutrality, although their behavior leans towards good – even self–sacrifice –– where the good of their tribe is at stake. Although they’ll steal everything in sight, elves are not murderous. They rarely attack anyone except those who threaten them or stand in their way.

Elves have an intense tribal unity that does not extend beyond their own tribe. Elves from other tribes are considered potential enemies as much as any other creature. Within a tribe all elves are considered equal with one exception, the chief. The chief rules for life and makes the major decisions concerning the tribe. The method of choosing the chief varies from tribe to tribe, with some electing the individual who demonstrates the most qualities of leadership while the leadership in other tribes is inherited by the descendants of the previous chief. Elves do not spend vast amounts of time huddled in conference or following their chief’s orders. Their love of freedom keeps elves from becoming embroiled in the complicated court intrigues that other races face. They prefer to engage in intrigues directed against outsiders. Only with considerable effort and intent can a stranger become accepted by an elf tribe or even an individual elf. The stranger must show bravery and a willingness to sacrifice for the elf to earn acceptance. Being an elf does not increase a stranger’s chances of being accepted by a tribe.

When in the company of outsiders, elves create tests of trust and friendship constantly for their companions. This continues until either the companions fail a test, in which case they will never earn the elf’s trust, or they succeed in passing enough tests to convince the elf to accept them. Years of conditioning have instilled within all elves the ability to move quickly over sandy and rocky terrain and run for long distances. Because of this natural maneuverability, elves spurn the riding of beasts for transportation. To do so is dishonorable. The Elven custom is keep up on one’s own or be left behind. Elven culture is rich and diverse, with elf song and dance being the most captivating in the Tablelands. They have turned celebrating into an art form. Elven songs and celebrations revolve around heroes of the tribe both ancient and current members. When a hunt goes well, a tribe showers the hunt master with praise. To celebrate a marriage, elves dance to the tales of long remembered lovers.

Elves have the reputation as being lazy and deceitful, which in most cases is true. They desire to lead short, happy lives as opposed to long, sad ones. This leads the elves to focus on the present rather than plan for or expect consequences in the future.

However, elves do work. Thought most elves provide for themselves and their tribe through herding, all elves have a propensity for raiding. Others become merchants and some thieves. In many cases others find it difficult to see the distinction. Though they detest hard labor, elves will spend hours negotiating with potential customers.