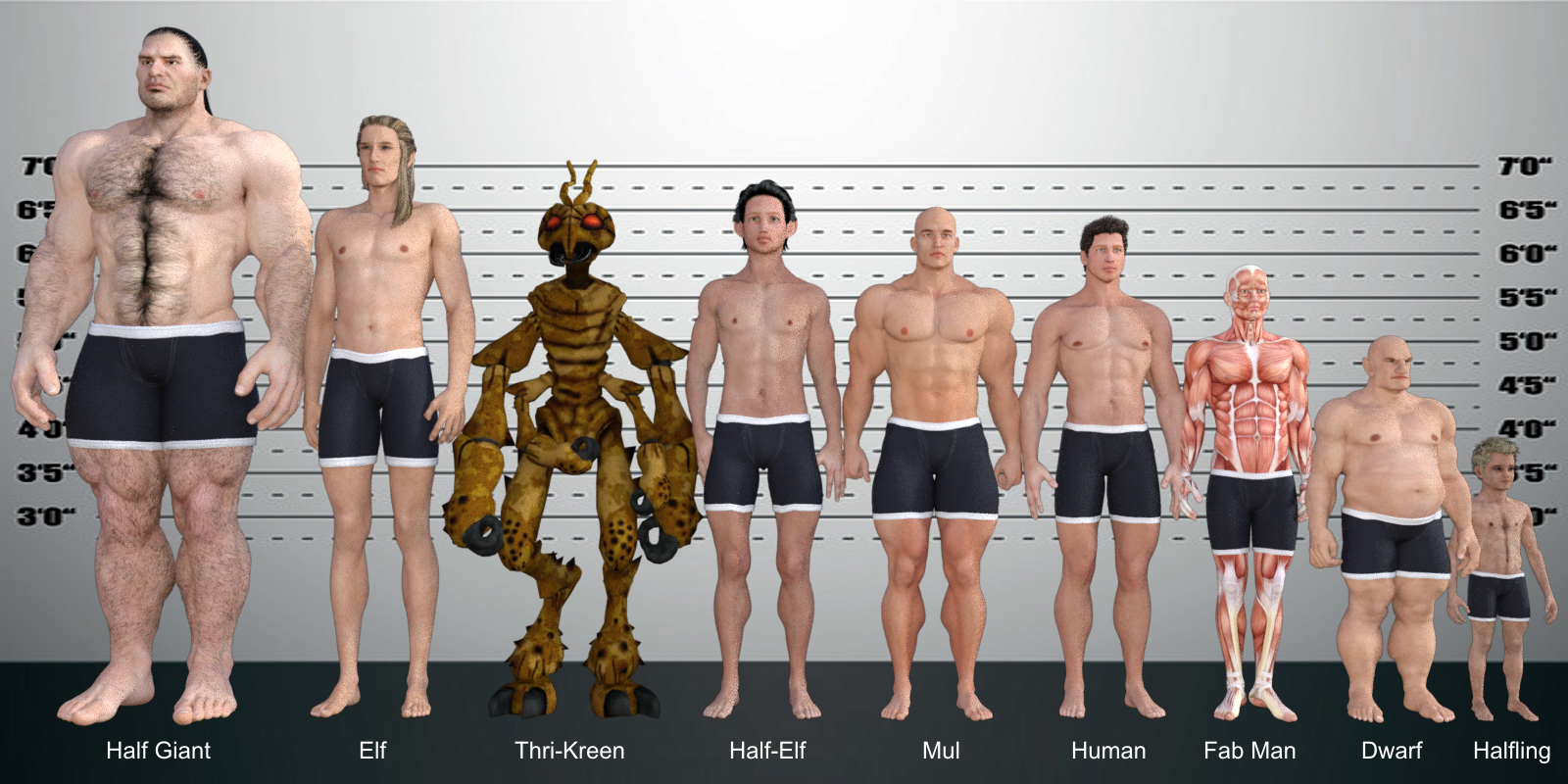 The playable races for Dark Sun have mainly stayed the same with the exception of size of Half-Giants.

These short and stocky defenders of mountain fortresses are often seen as stern and humorless. Known for mining the earth’s treasures and crafting magnificent items from ore and gemstones, they have an unrivaled affinity for the bounties of the deep earth. Dwarves also have a tendency toward traditionalism and isolation that sometimes manifests as xenophobia.

Tall, noble, and often haughty, elves are long-lived and subtle masters of the wilderness. Often they use their intrinsic link to nature to forge new spells and create wondrous items that, like their creators, seem nearly impervious to the ravages of time. A private and often introverted race, elves can give the impression they are indifferent to the plights of others.

Fab Man Fabricated Man or “Fab Man” or just “Fab” for short, is a new bio engineered race created to do a single job and then be disposed of. Created and used only by the remaining Slave City States some of these beings have escaped and made it to other parts of Athas. The Fab Man’s skin is transparent leaving only the raw muscles and cartilage underneath visible, this makes them easy to recognize and most other humanoids find them repulsive. During their growing phase where they are matured to the age of 18 within 12 weeks they are subjected to intense stimulated education, filling their minds with vast knowledge but that leaves them with no real world experience on how to apply it and they can often be extremely naïve.

Often caught between the worlds of their progenitor races, half-elves are a race of both grace and contradiction. Their dual heritage and natural gifts often create brilliant diplomats and peacemakers, but half-elves are often susceptible to an intense and even melancholic isolation, realizing that they are never truly part of elven or human society.

Physically, the half‐giant is enormous, standing about 9 1/2 feet tall and weighing around 400 pounds. Half‐giants have thick hair, which is often kept braided (especially among females) or in a single tail that hangs behind the head and down the back. They dress in garb suitable to their occupation or environment. Half‐giants mature at about 24 years of age and can live about 170 years. In the past, they were much larger, but after millennia of inter-breeding with other races their height has decreased somewhat from about an 11 foot average to between 8 1/2 and 9 1/2 average today. Their stats remain the same but these smaller descendants are also called “Lesser-Giants”.

Members of this diminutive race find strength in family, community, and their Tribe. While their fierce curiosity is sometimes at odds with their intrinsic common sense, half lings are eternal optimists and cunning opportunists with an incredible knack for getting out the worst situations.

Ambitious, sometimes heroic, and always confident, humans have an ability to work together toward common goals that makes them a force to be reckoned with. Though short-lived compared to other races, their boundless energy and drive allow them to accomplish much in their brief lifetimes.

Second only to the half‐giant, the mul is the strongest of the common humanoid races of the tablelands. Muls grow as high as seven feet, weighing upwards of 250 pounds, but carry almost no fat at all on their broad muscular frames. Universal mul characteristics include angular, almost protrusive eye ridges, and ears that point sharply backwards against the temples. Most muls have dark copper–colored skin and hairless bodies.

Mature Thri‐kreen stand about 7 feet tall, with a rough body length of 11 feet. Their four arms end in claws; their two legs are extremely powerful, capable of incredible leaps. However, kreen are unable to jump backwards. Their body is covered with a sandy–yellow chitin, a tough exoskeleton that grants the Thrikreen protection from blows. Their head is topped with two antennae, and their two eyes are compound and multifaceted. The kreen mouth consists of small pincers. Male and female Thri‐kreen are physically indistinguishable. Thri‐kreen usually do not wear clothing, but wear some sort of harness to carry weapons and food. Many wear leg or armbands, or bracelets. Some attach rings on different places on their chitin, though this requires careful work by a skilled artisan.

Special Racial Notes as It Pertains to Dark Sun…

If you want to randomly determine your characters height, use the Min Height of the gender and race and add the dice roll from the Random column.

If you want to randomly determine your characters weight, use the Min Weight of the gender and racer and add the dice roll from the random column.

If you need to determine the max age of a character add the number and dice roll from the Max Age column.

Active vs Inactive: An active character is one who is moving around doing things, running errands, engaging in combat or working. Inactive means laying about being a couch potato.
Calories: This is the number of calories required per day to maintain current body weight. Eating less than the inactive calories every day will result in weight loss of the Con bonus per pound per week with a minimum of 1. You can also gain weight by the Con bonus per pound a week (1 minimum) by eating more then needed calories each day. Not eating at all See Starvation rules.
Note: We realize there are calculators to determine exact calorie requirements based on weight, height and age and you are free to use such tools to calculate more precise numbers but these numbers were created as a simpler system for game play.
Water: Not drinking enough water can lead to dehydration. See Dehydration rules.