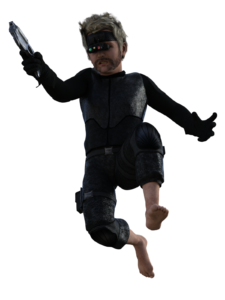 Life is an endless adventure for those who live by their wits. Ever just one step ahead of danger, rogues bank on their cunning, skill, and charm to bend fate to their favor. Never knowing what to expect, they prepare for everything, becoming masters of a wide variety of skills, training themselves to be adept manipulators, agile acrobats, shadowy stalkers, or masters of any of dozens of other professions or talents. Thieves and gamblers, fast talkers and diplomats, bandits and bounty hunters, and explorers and investigators all might be considered rogues, as well as countless other professions that rely upon wits, prowess, or luck. Although many rogues favor cities and the innumerable opportunities of civilization, some embrace lives on the road, journeying far, meeting exotic people, and facing fantastic danger in pursuit of equally fantastic riches. In the end, any who desire to shape their fates and live life on their own terms might come to be called rogues.

As a rogue, you have the following class features.

At 6th level, you can choose two more of your proficiencies (in skills or with thieves’ tools) to gain this benefit.

Beginning at 1st level, you know how to strike subtly and exploit a foe’s distraction. Once per turn, you can deal an extra 1d6 damage to one creature you hit with an attack if you have advantage on the attack roll. The attack must use a finesse or a ranged weapon.

The amount of the extra damage increases as you gain levels in this class, as shown in the Sneak Attack column of the Rogue table.

During your rogue training you learned thieves’ cant, a secret mix of dialect, jargon, and code that allows you to hide messages in seemingly normal conversation. Only another creature that knows thieves’ cant understands such messages. It takes four times longer to convey such a message than it does to speak the same idea plainly.

In addition, you understand a set of secret signs and symbols used to convey short, simple messages, such as whether an area is dangerous or the territory of a thieves’ guild, whether loot is nearby, or whether the people in an area are easy marks or will provide a safe house for thieves on the run.

Starting at 2nd level, your quick thinking and agility allow you to move and act quickly. You can take a bonus action on each of your turns in combat. This action can be used only to take the Dash, Disengage, or Hide action.

At 3rd level, you choose an archetype that you emulate in the exercise of your rogue abilities: Thief, Assassin, or Cyberplane Savant. Your archetype choice grants you features at 3rd level and then again at 9th, 13th, and 17th level.

Starting at 5th level, when an attacker that you can see hits you with an attack, you can use your reaction to halve the attack’s damage against you.

By 11th level, you have refined your chosen skills until they approach perfection. Whenever you make an ability check that lets you add your proficiency bonus, you can treat a d20 roll of 9 or lower as a 10.

Starting at 14th level, if you are able to hear, you are aware of the location of any hidden or invisible creature within 10 feet of you.

By 15th level, you have acquired greater mental strength. You gain proficiency in Wisdom saving throws.

Beginning at 18th level, you are so evasive that attackers rarely gain the upper hand against you. No attack roll has advantage against you while you aren’t incapacitated.

At 20th level, you have an uncanny knack for succeeding when you need to. If your attack misses a target within range, you can turn the miss into a hit. Alternatively, if you fail an ability check, you can treat the d20 roll as a 20.

Once you use this feature, you can’t use it again until you finish a short or long rest.

Rogues have many features in common, including their emphasis on perfecting their skills, their precise and deadly approach to combat, and their increasingly quick reflexes. But different rogues steer those talents in varying directions, embodied by the rogue archetypes. Your choice of archetype is a reflection of your focus—not necessarily an indication of your chosen profession, but a description of your preferred techniques.

You hone your skills in the larcenous arts. Burglars, bandits, cutpurses, and other criminals typically follow this archetype, but so do rogues who prefer to think of themselves as professional treasure seekers, explorers, delvers, and investigators. In addition to improving your agility and stealth, you learn skills useful for delving into ancient ruins, reading unfamiliar languages, and using magic items you normally couldn’t employ.

Starting at 3rd level, you can use the bonus action granted by your Cunning Action to make a Dexterity (Sleight of Hand) check, use your thieves’ tools to disarm a trap or open a lock, or take the Use an Object action.

When you choose this archetype at 3rd level, you gain the ability to climb faster than normal; climbing no longer costs you extra movement. In addition, when you make a running jump, the distance you cover increases by a number of feet equal to your Dexterity modifier.

Starting at 9th level, you have advantage on a Dexterity (Stealth) check if you move no more than half your speed on the same turn.

By 13th level, you have learned enough about the workings of magic that you can improvise the use of items even when they are not intended for you. You ignore all class, race, and level requirements on the use of magic items.

You focus your training on the grim art of death. Those who adhere to this archetype are diverse: hired killers, spies, bounty hunters, and even specially anointed priests trained to exterminate the enemies of their deity. Stealth, poison, and disguise help you eliminate your foes with deadly efficiency.

When you choose this archetype at 3rd level, you gain proficiency with the disguise kit and the poisoner’s kit.

Starting at 3rd level, you are at your deadliest when you get the drop on your enemies. You have advantage on attack rolls against any creature that hasn’t taken a turn in the combat yet. In addition, any hit you score against a creature that is surprised is a critical hit.

Starting at 9th level, you can unfailingly create false identities for yourself. You must spend seven days and 2500 Calories to establish the history, profession, and affiliations for an identity. You can’t establish an identity that belongs to someone else. For example, you might acquire appropriate clothing, letters of introduction, and official looking certification to establish yourself as a member of a corporation from another city-state so you can insinuate yourself into the company of other wealthy executives. Thereafter, if you adopt the new identity as a disguise, other creatures believe you to be that person until given an obvious reason not to.

At 13th level, you gain the ability to unerringly mimic another person’s speech, writing, and behavior. You must spend at least three hours studying these three components of the person’s behavior, listening to speech, examining handwriting, and observing mannerisms.

Your ruse is indiscernible to the casual observer. If a wary creature suspects something is amiss, you have advantage on any Charisma (Deception) check you make to avoid detection.

Starting at 17th level, you become a master of instant death. When you attack and hit a creature that is surprised, it must make a Constitution saving throw (DC 8 + your Dexterity modifier + your proficiency bonus). On a failed save, double the damage of your attack against the creature.

Some rogues enhance their fine-honed skills of stealth and agility with magic, learning ways to connect to the cyberplane through enhanced use of SpellWares. These rogues include pickpockets and hackers, but also pranksters, mischief-makers, and a significant number of adventurers.

When you reach 3rd level, you gain the ability to cast spells from the wizard spell list. You cast spells similar to a Cybermage and like a Cybermage, you are dependent on your communicator not only for spells but for casting.

Spell Slots. The table below shows how many spell slots you have to cast your spells of 1st level and higher. To cast one of these spells, you must expend a slot of the spell’s level or higher. You regain all expended spell slots when you finish a long rest.

Spells Known of 1st-Level and Higher. You know three 1st-level wizard spells of your choice, two of which you must choose from the enchantment and illusion spells on the wizard spell list.

The Spells Known column of the table below shows when you learn more wizard spells of 1st level or higher. Each of these spells must be of a level for which you have spell slots. For instance, when you reach 7th level in this class, you can learn one new spell of 1st or 2nd level. The spells you learn at 8th, 14th, and 20th level can come from any school of magic.

Whenever you gain a level in this class, you can replace one of the wizard spells you know with another spell of your choice from the wizard spell list. The new spell must b e of a level for which you have spell slots.

Starting at 3rd level, when you cast mage hand, you can make the spectral hand invisible, and you can perform the following additional tasks with it:

Starting at 9th level, if you are hidden from a creature when you cast a spell on it, the creature has disadvantage on any saving throw it makes against the spell this turn.

At 13th level, you gain the ability to distract targets with your mage hand. As a bonus action on your turn, you can designate a creature within 5 feet of the spectral hand created by the spell. Doing so gives you advantage on attack rolls against that creature until the end of the turn.

At 17th level, you gain the ability to magically steal the knowledge of how to cast a spell from another spellcaster. Immediately after a creature casts a spell that targets you or includes you in its area of effect, you can use your reaction to force the creature to make a saving throw with its spellcasting ability modifier. The DC equals your spell save DC. On a failed save, you negate the spell’s effect against you, and you steal the knowledge of the spell if it is at least 1st level and of a level you can cast (it doesn’t need to be a wizard spell). For the next 8 hours, you know the spell and can cast it using your spell slots. The creature can’t cast that spell until the 8 hours have passed. Once you use this feature, you can’t use it again until you finish a long rest.