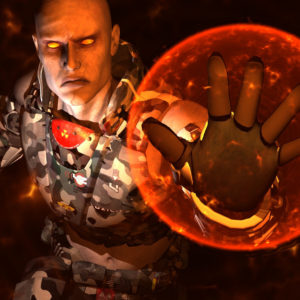 Where the psion spends his days studying the intricacies of psionic power and unlocking the mysteries of the mind, others choose to use their internal power to augment their physical form. These psychic warriors use their psionic potential as a way to improve their natural abilities, becoming fierce and deadly in their chosen path.

As a Psychic Warrior, you gain the following class features.

Along with your martial training, you have become adept in the powers of the mind.

A Psychic Warrior’s ability to manifest powers is limited by the power points he has available. His base daily allotment of power points is given on the table above. Once you power Points reach 0, you can regain them after a long rest.

The number of times a Psychic Warrior can manifest powers in a day is limited only by his daily power points. A Psychic Warrior simply knows his powers; they are ingrained in his mind. He does not need to prepare them (in the way that some spellcasters prepare their spells). You use your Wisdom whenever a power refers to your spellcasting ability. In addition, you use your Wisdom modifier when setting the saving throw DC for a spell you cast and when making an attack roll with one.

You adopt a particular style of fighting as your specialty. Choose one of the following options. You can’t take a Fighting Style option more than once, even if you later get to choose again.

You gain a +2 bonus to attack rolls you make with ranged weapons.

While you are wearing armor, you gain a +1 bonus to AC.

When you are wielding a melee weapon in one hand and no other weapons, you gain a +2 bonus to damage rolls with that weapon.

You gain the feat Improved Tactical Training for free. You gain all the benefits except for the attribute increase.

When a creature you can see attacks a target other than you that is within 5 feet of you, you can use your reaction to impose disadvantage on the attack roll. You must be wielding a shield.

When you engage in two-weapon fighting, you can add your ability modifier to the damage of the second attack.

Your choice grants you features at 3rd level and again at 7th, 15th, and 20th level. Those features include different abilities for the Trance feature.

The paths available to the Psychic Warrior are: Assassin’s Path, Interceptor Path, and the Mind Knight

Trance is similar to the Psion’s Autohypnosis, but it changes for each path. However, you do gain Autohypnosis as a skill as well as the following base benefits.

Once per day, after a short rest, you can regain your level x 5 in Power Points + your Intelligence Bonus in power points.

You can attempt to memorize a long string of numbers, a long passage of verse, or some other particularly difficult piece of information (but you can’t memorize magical writing or similarly exotic scripts). Each successful check allows you to memorize a single page of text (up to 800 words), numbers, diagrams, or sigils (even if you don’t recognize their meaning). If a document is longer than one page, you can make additional checks for each additional page. You always retain this information; however, you can recall it only with another successful Autohypnosis check at DC 15.

You can attempt to subconsciously prevent yourself from dying. If you reach 0 HP, you can use your Autohypnosis skill in place of the unmodified d20 roll to see if you become stable. The DC is still 10 as normal. If the check is successful, you stabilize and do not need to make any more Death Checks (you do not gain any hit points, however, as a result of the check).

In response to any fear effect, you make a saving throw normally. If you fail the saving throw, you can make an Autohypnosis check on your next round even while overcome by fear. If your Autohypnosis check meets or beats the DC for the fear effect, you may make an additional Wisdom save with a +4 bonus to shrug off the fear. On a failed check, the fear affects you normally, and you gain no further attempts to shrug off that particular fear effect.

If reduced to 0 hit points, you can make an Autohypnosis check. If successful, you can take a standard action while at 0 hit points without taking 1 point of damage (or any other action the DM deems strenuous, including some free actions such as casting a quickened spell). You must make a check for each strenuous action you want to take. A failed Autohypnosis check in this circumstance carries no direct penalty—you can choose not to take the strenuous action and thus avoid the hit point loss. If you do so anyway, you drop to –1 hit points, as normal when disabled.

At 6th level, if the psychic warrior makes a melee attack (and a melee attack only), he can manifest one of his path powers as part of that attack action. The power takes effect immediately after the attack has been finished. Touch range powers are transmitted through the melee attack to the attacked target. You gain the benefits of the power on the attack made, even if the power is what grants the weapon to make the attack. You may only activate a path power in this fashion once per round.

At 20th level, once per day as a Bonus Action, the psychic warrior can enter into a very powerful Trance. As long as he maintains psionic focus, for up to 5 minutes the psychic warrior adds his Wisdom modifier to his attack rolls, damage rolls, AC, skill checks, ability checks, saves, and initiative, and he increases his speed by +5 feet for every point of his Wisdom modifier. These benefits stack with those that might be granted by his active path’s Trance.

Presented below are some of the possible different warrior paths that psychic warriors may choose. Unless otherwise indicated, if you expend psionic focus to activate a maneuver, you still gain the benefit of your Trance until the end of your turn.

While others prefer to stand boldly in the face of danger, your preferred weapon is stealth and silence. When you attack, your enemy is bound to fall.

Beginning at 3rd level, any time you strike an enemy with a melee attack and there are no other enemies adjacent to you, you can expend your psionic focus to deal an additional +2d6 damage. For every five psychic warrior levels you gain thereafter, this damage increases by +1d6. This damage is precision-based damage.

Also at 3rd level, you gain proficiency in the skill Stealth.

Also 3rd level, as a Reaction, you can expend your psionic focus to gain a +2 dodge bonus to your AC until the beginning of your next turn. This bonus increases by +1 for every five psychic warrior levels you have. In addition, if you did this in response to an attack and that attack misses you, you may take a 5-foot step as part of this action.

At 7th level, you are at your deadliest when you get the drop on your enemies. You have advantage on attack rolls against any creature that hasn’t taken a turn in the combat yet. In addition, any hit you score against a creature that is surprised is a critical hit.

At 15th level, you can use your mind to assassinate your targets. You gain the power Mind Thrust and may use it normally. However, if you expend your psionic focus, you can deal 10d10 points of damage to a single target that is unaware of your presence. If the target detects you, or beats you on your Stealth check, you only do 3d10 damage if you expend your psionic focus.

At 20th level, you become a master of instant death. When you attack and hit a creature that is surprised, it must make a Constitution saving throw (DC 8 + your Dexterity modifier + your proficiency bonus). On a failed save, double the damage of your attack against the creature.

You are adept at engaging enemies, guarding your allies, and blocking interlopers. Speed and maneuverability are not your only tools; you know how stop a foe in his tracks.

Beginning at 3rd level, while maintaining psionic focus, you gain a +1 bonus on attack and damage rolls made against any opponent that threatens any of your allies. This bonus increases by 1 every four psychic warrior levels thereafter.

Also at 3rd level, you gain proficiency in the skill Intimidation.

Also at 3rd level, you can expend your psionic focus as a Reaction when an enemy you threaten attacks one of your allies to make a single melee attack or Shove attempt against that enemy. Your attack or Shove attempt is resolved before the enemy’s attack. If you made a melee attack and it is successful, the struck enemy takes a penalty equal to the bonus of the Interceptor trance on the attack and damage rolls of the attack that triggered this maneuver.

Beginning at 7th level, you are able to maintain a sphere of kinetic inertness. You and friendly creatures within 10 feet of you have resistance to damage from spells and psionic powers. At 18th level, the range of this sphere increases to 30 feet.

At 20th level, you attain the pinnacle of resilience in battle. At the start of each of your turns provided you maintain your psionic focus, you regain hit points equal to 5 + your Wisdom modifier if you have no more than half your total HP left. You don’t gain this benefit if you have 0 HP. Additionally, you can expend your psionic focus and have the possibility to regain all your hit points. Again, if you are below half your total HP, you make a Wisdom save. If successful, you regain all you HP. If you fail, you regain only 1/4 of your HP (round up).

You have sworn an oath to your order, and in exchange you have been trained in mystic techniques that allow you to summon a weapon from beyond time and space, while protecting yourself with the power of your mind.

Also at 3rd level, you gain proficiency in the skill Persuasion.

At 7th level, you can use Call weaponry and strike in the same action. When you do you have the opportunity deal extra psychic damage equal to half your Psychic Warrior level rounded down in d6’s. Thus, at 7th level, when you receive this feature, you can use your Call weaponry power and immediately strike dealing weapon damage + 3d6. This can only be done on your first action of any combat. All attacks and/or actions afterward are handled normally with normal weapon damage.

At 15th level, you are considered to always have the power inertial armor active. You can augment it at any time using your Power Points accordingly, increasing the AC bonus and it will last the normal duration at that AC bonus. Once the duration is over, it returns to the base, un-augmented, AC bonus.

At 20th level, the weapon you call using Call weaponry is already a +3 weapon without having to use any additional Power Points. However, you cannot augment it further with additional points.