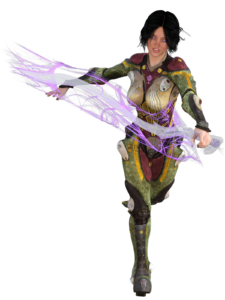 Role: As a wielder of a weapon first and foremost, the Psi-Blade excels as a front-line combatant on the battlefield. Her limited armor options and defensive abilities can be a hindrance, but her varied blade abilities can make her an excellent mobile warrior or battlefield controller.

As a Psi-Blade, you gain the following class features.

As a ready action, a Psi-Blade can form a semi-solid weapon composed of psychic energy distilled from her own mind.

Regardless of the weapon form a Psi-Blade has chosen, her mind blade does not have a set damage type. When shaping her weapon and assigning abilities to it, the Psi-Blade chooses whether it will deal bludgeoning, piercing, or slashing damage. The Psi-Blade may change the damage type of an existing mind blade, or may summon a new mind blade with a different damage type, as a normal action; otherwise, the mind blade retains the last damage type chosen every time it is summoned.

The blade can be broken (it has hardness 10 and 10 hit points); however, a Psi-Blade can simply create another on her next action. The moment she relinquishes her grip on her blade, it dissipates (unless she intends to throw it; see below). A mind blade is considered a magic weapon for the purpose of overcoming damage reduction and is considered a masterwork weapon.

A Psi-Blade can manifest a Mind Blade with the following properties and the weapon will be treated as if it had that property: Finesse, two-handed, versitle

The Psi-Blade chooses the appearance of her mind blade, although its shape must reflect the selections the Psi-Blade has chosen: a bludgeoning mind blade would be blunt, slashing would have an edge, etc.

Beginning at 2nd level and every even Psi-Blade level thereafter, a Psi-Blade may choose one of a number of abilities to add to her repertoire. Some blade skills have prerequisites that must be met before they can be chosen. All blade skills may only be chosen once and require the Psi-Blade to be using her mind blade unless otherwise stated in the skill’s description.

A complete list of Blade skills can be found here, Blade Skills.

A Psi-Blade’s mind blade improves as the character gains higher levels. At 3rd level and every fourth level thereafter, the mind blade gains a +1 bonus to their Mind Blade. This makes the blade magic for purposes of damage reduction. Addition that she may add additional effects onto the blade provided they do not exceed their maximum bonus on the blade. For example, if the Mind Blade only has a +1, you can only choose from the +1 enhancements. If it has a +2 a higher levels, you can choose from the +1 or the +2 enhancements.. A soulknife can choose any combination of weapon special abilities. You can place a number of weapon special abilities on your Mind Blade equal to 1/4 your level rounded down (minimum 1). Again, you cannot exceed your maximum Mind Blade bonus. Here is a chart of the available weapon special abilities.

At 3rd level, you choose a Blade’s Path that you emulate in the exercise of your Psi-Blade abilities: Psychic Marauder or Gifted Blade. Your path choice grants you features at 3rd level and then again at 9th, 13th, and 17th level

At 20th level, a Psi-Blade reaches the pinnacle of her art and her connection to her blade is so strong it cannot be severed. She no longer requires a Wisdom save to maintain her mind blade in a null psionics field, although it still loses any bonus and special abilities. In addition, she may change the configurations of her mind blade’s special abilities at will as an Attack action, which also resets any penalties that may have accrued from the Fluid Form and Improved Fluid Form blade skills.

There are two paths that a Psi-Blade may travel: the Path of the Psychic Marauder who specializes in enhancing each strike with psychic power or the Gifted Blade who along with their Mind Blade wields a good measure of psionic powers as well.

This path specializes in channeling their psychic energy into causing their enemies struck by their Mind Blade extra pain and damage.

As a bonus action, a Marauder of 3rd level or higher can imbue her mind blade with destructive psychic energy. This effect deals an extra 1d8 points of damage on any attack she wishes to activate it on (as long as the attack is made with her mind blade). A Marauder may hold the charge as long as she likes without discharging. It does not go off on any attack unless she chooses to use it, and the charge is not wasted if an attack misses. Mindless creatures are immune to this damage, although non-mindless creatures immune to mind-affecting effects are affected by this damage as normal. (Unlike the rogue’s sneak attack, the psychic strike is not precision damage and can affect creatures otherwise immune to extra damage from critical hits or more than 30 feet away.) A mind blade deals this extra damage only once when this ability is called upon, but a Marauder can imbue her mind blade with psychic energy again by taking another move action. Additionally, she may recharge it as a bonus action by expending her psionic focus.

Once a Marauder has prepared her blade for a psychic strike, it holds the extra energy until it is used (whether the attack is successful or not). Even if the Marauder drops the mind blade (or it otherwise dissipates, such as when it is thrown), it is still imbued with psychic energy when the Marauder next materializes it.

At 9th level, You can use your action to make a melee attack against any number of creatures within 5 feet of you, with a separate attack roll for each target.

Starting at 13th level, your attacks with your Mind Blade score a critical hit on a roll of 18–20. This does not count on any other weapon.

There are some soulknives who learn to manifest powers, as well as to form mind blades. These gifted individuals wield both blade and mind with deadly efficiency.

At 3rd level, a gifted blade gains the ability to manifest a small number of psionic powers, which are drawn from the gifted blade power list.

A gifted blade never needs to prepare powers ahead of time; he draws them from his mind when needed. When a gifted blade recovers his daily power points after resting, he may choose to rotate one or more powers he knows for new ones. These powers must always be chosen from the gifted blade power list, and the maximum number of powers the gifted blade may know at any one time in this fashion is listed on the table below.

To learn or manifest a power, a gifted blade must have a Wisdom score of at least 10 + the power’s level.

A gifted blade’s ability to manifest powers is limited by the power points he has available. His base daily allotment of power points is given on table below. Intelligence is your manifesting ability for your psionic powers. You use your Intelligence whenever a power refers to your spellcasting ability. In addition, you use your Intelligence modifier when setting the saving throw DC for a psionic power you manifest and when making an attack roll with one.

Also at 3rd level, you have trained your mind to gain mastery over your body and the mind’s own deepest capabilities. You gain the special Intelligence skill Autohypnosis.

Regain Power Points
Once per day, after a short rest, you can regain your level x 5 in Power Points + your Intelligence Bonus in power points.
Memorize
You can attempt to memorize a long string of numbers, a long passage of verse, or some other particularly difficult piece of information (but you can’t memorize magical writing or similarly exotic scripts). Each successful check allows you to memorize a single page of text (up to 800 words), numbers, diagrams, or sigils (even if you don’t recognize their meaning). If a document is longer than one page, you can make additional checks for each additional page. You always retain this information; however, you can recall it only with another successful Autohypnosis check at DC 15.
Resist Fear
In response to any fear effect, you make a saving throw normally. If you fail the saving throw, you can make an Autohypnosis check on your next round even while overcome by fear. If your Autohypnosis check meets or beats the DC for the fear effect, you may make an additional Wisdom save with a +4 bonus to shrug off the fear. On a failed check, the fear affects you normally, and you gain no further attempts to shrug off that particular fear effect.
Tolerate Poison
You can attempt to resist the effect of any standard poison. Every time you make a saving throw against the poison, you make an Autohypnosis check. If your Autohypnosis check exceeds the DC of the poison, you receive a +4 bonus on your Constitution saving throw against the poison. This skill has no effect on the initial saving throw against poison.
Willpower
If reduced to 0 hit points, you can make an Autohypnosis check. If successful, you can take a standard action while at 0 hit points without taking 1 point of damage (or any other action the DM deems strenuous, including some free actions such as casting a quickened spell). You must make a check for each strenuous action you want to take. A failed Autohypnosis check in this circumstance carries no direct penalty—you can choose not to take the strenuous action and thus avoid the hit point loss. If you do so anyway, you drop to –1 hit points, as normal when disabled.

At 9th level, each day when you meditate to regain your power points, you gain a +3 bonus that can be used on any one die roll. Every two psion levels thereafter, this ability may be used one additional time per day and the bonus is increased by 1.

At 13th level, once per day as a Reaction, you may negate a critical hit that would have hit you, and instead receive normal damage.

At 17th level, you gain an additional move action each round, but it may only be used for either the move, stand up, or mount/dismount a steed move actions. 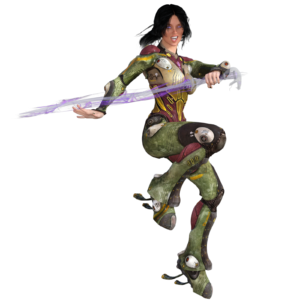 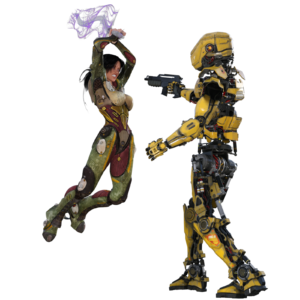