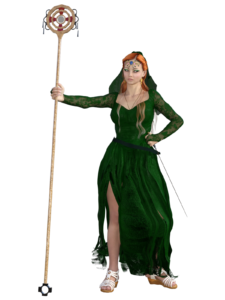 Within the purity of the elements and the order of the wilds lingers a power beyond the marvels of civilization. Furtive yet undeniable, these primal magics are guarded over by servants of philosophical balance known as druids. Allies to beasts and manipulators of nature, these often misunderstood protectors of the wild strive to shield their lands from all who would threaten them and prove the might of the wilds to those who lock themselves behind city walls. Rewarded for their devotion with incredible powers, druids gain unparalleled shape-shifting abilities, the companionship of mighty beasts, and the power to call upon nature’s wrath. The mightiest temper powers akin to storms, earthquakes, and volcanoes with primeval wisdom long abandoned and forgotten by civilization.

As a Druid, you gain the following class features.

You know Druidic, the secret language of druids. You can speak the language and use it to leave hidden messages. You and others who know this language automatically spot such a message. Others spot the message’s presence with a successful DC 15 Wisdom (Perception) check but can’t decipher it without magic.

Drawing on the divine essence of nature itself, you can cast spells to shape that essence to your will from the druid spell list. (Note:  You must apply the Druid filter to see spells available to you)

The table above shows how many spell slots you have to cast your spells of 1st level and higher. To cast one of these druid spells, you must expend a slot of the spell’s level or higher. You regain all expended spell slots when you finish a long rest.

You prepare the list of druid spells that are available for you to cast, choosing from the druid spell list. When you do so, choose a number of druid spells equal to your Wisdom modifier + your druid level (minimum of one spell). The spells must be of a level for which you have spell slots.

You can also change your list of prepared spells when you finish a long rest. Preparing a new list of druid spells requires time spent in prayer and meditation: at least 1 minute per spell level for each spell on your list.

You can cast a druid spell as a ritual if that spell has the ritual tag and you have the spell prepared.

You can use a druidic focus (see Equipment) as a spellcasting focus for your druid spells.

Starting at 2nd level, you can use your action to magically assume the shape of a beast that you have seen before. You can use this feature twice. You regain expended uses when you finish a short or long rest.

While you are transformed, the following rules apply:

Your game statistics are replaced by the statistics of the beast, but you retain your alignment, personality, and Intelligence, Wisdom, and Charisma scores. You also retain all of your skill and saving throw proficiencies, in addition to gaining those of the creature. If the creature has the same proficiency as you and the bonus in its stat block is higher than yours, use the creature’s bonus instead of yours. If the creature has any legendary or lair actions, you can’t use them.

You can’t cast spells, and your ability to speak or take any action that requires hands is limited to the capabilities of your beast form. Transforming doesn’t break your concentration on a spell you’ve already cast, however, or prevent you from taking actions that are part of a spell, such as call lightning, that you’ve already cast.

You retain the benefit of any features from your class, race, or other source and can use them if the new form is physically capable of doing so. However, you can’t use any of your special senses, such as darkvision, unless your new form also has that sense.

Starting at 18th level, the primal magic that you wield causes you to age more slowly. For every 10 years that pass, your body ages only 1 year.

Beginning at 18th level, you can cast many of your druid spells in any shape you assume using Wild Shape. You can perform the somatic and verbal components of a druid spell while in a beast shape, but you aren’t able to provide material components.

At 20th level, you can use your Wild Shape an unlimited number of times.

Additionally, you can ignore the verbal and somatic components of your druid spells, as well as any material components that lack a cost and aren’t consumed by a spell. You gain this benefit in both your normal shape and your beast shape from Wild Shape.

Though their organization is invisible to most outsiders, druids are part o f a society that spans the land, ignoring political borders. All druids are nominally members of this druidic society, though some individuals are so isolated that they have never seen any high-ranking members of the society or participated in druidic gatherings. Druids recognize each other as brothers and sisters. Like creatures of the wilderness, however, druids sometimes compete with or even prey on each other. At a local scale, druids are organized into circles that share certain perspectives on nature, balance, and the way of the druid.

Circle of the Land

The Circle of the Land is made up of mystics and sages who safeguard ancient knowledge and rites through a vast oral tradition. These druids meet within sacred circles of trees or standing stones to whisper primal secrets in Druidic. The circle’s wisest members preside as the chief priests of communities that hold to the Old Faith and serve as advisors to the rulers of those folk. As a member of this circle, your magic is influenced by the land where you were initiated into the circle’s mysterious rites.

When you choose this circle at 2nd level, you learn one additional druid cantrip of your choice.

Starting at 2nd level, you can regain some of your magical energy by sitting in meditation and communing with nature. During a short rest, you choose expended spell slots to recover. The spell slots can have a combined level that is equal to or less than half your druid level (rounded up), and none of the slots can be 6th level or higher. You can’t use this feature again until you finish a long rest. For example, when you are a 4th-level druid, you can recover up to two levels worth of spell slots. You can recover either a 2nd-level slot or two 1st-level slots.

Your mystical connection to the land infuses you with the ability to cast certain spells. At 3rd, 5th, 7th, and 9th level you gain access to circle spells connected to the land where you became a druid. Choose that land—coast, desert, forest, grassland, mountain, swamp, or subterranean—and consult the associated list of spells. Note: due to Athas’ odd climate, the following should be limited by the DM as a choice: forest, grassland, and swamp. These are not completely restricted, but because Athas is mostly a burning waste, they should be limited.

Starting at 6th level, moving through nonmagical difficult terrain costs you no extra movement. You can also pass through nonmagical plants without being slowed by them and without taking damage from them if they have thorns, spines, or a similar hazard. In addition, you have advantage on saving throws against plants that are magically created or manipulated to impede movement, such those created by the entangle spell.

When you reach 10th level, you can’t be charmed or frightened by elementals or fey, and you are immune to poison and disease.

When you reach 14th level, creatures of the natural world sense your connection to nature and become hesitant to attack you. When a beast or plant creature attacks you, that creature must make a Wisdom saving throwagainst your druid spell save DC. On a failed save, the creature must choose a different target, or the attack automatically misses. On a successful save, the creature is immune to this effect for 24 hours. The creature is aware of this effect before it makes its attack against you.

Circle of the Moon

Druids of the Circle of the Moon are fierce guardians of the wilds. Their order gathers under the full moon to share news and trade warnings. They haunt the deepest parts of the wilderness, where they might go for weeks on end before crossing paths with another humanoid creature, let alone another druid. Changeable as the moon, a druid of this circle might prowl as a great cat one night, soar over the treetops as an eagle the next day, and crash through the undergrowth in bear form to drive off a trespassing monster. The wild is in the druid’s blood.

When you choose this circle at 2nd level, you gain the ability to use Wild Shape on your turn as a bonus action, rather than as an action. Additionally, while you are transformed by Wild Shape, you can use a bonus action to expend one spell slot to regain 1d8 hit points per level of the spell slot expended.

Starting at 6th level, your attacks in beast form count as magical for the purpose of overcoming resistance and immunity to nonmagical attacks and damage.

At 10th level, you can expend two uses of Wild Shape at the same time to transform into an air elemental, an earth elemental, a fire elemental, or a water elemental.

By 14th level, you have learned to use magic to alter your physical form in more subtle ways. You can cast the alter self spell at will. 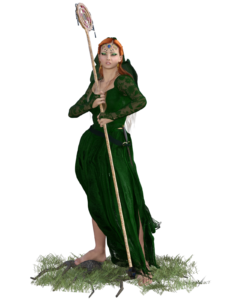