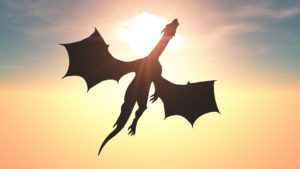 Back in 1995, Dylan introduced our gaming group to the first adventure in Dark Sun Future. We were plunged into a mind bending world of new possibilities, where magic and technology coexisted and mingled in cool, fascinating and sometimes ludicrous ways. There were already many role playing games of this sort of genre we were familiar with such as Rifts and Shadowrun. Yet none of them really seemed to have the breath of magic that the Advanced Dungeons and Dragons 2nd Edition had at the time, and it was that battle hardened arcane finally becoming modernized, in that alien but also very unique world of Athas, that allowed us to plunge feet first into something unforgettable.

Where modern adventurers still seek to slay the mighty dragon, but that dragon doesn’t exist as a beast terrorizing the farmers and kingdoms. It manipulates the markets, monopolizes industries and its highly cherished hoard of gold has been turned in for stock shares and options. If that seems so un-fantasy and drab, consider the band of adventurers that consist of a Cybermage that abuses magic and technology, a Barbarian road warrior straight from the wastelands like from the Mad Max movies, a Paladin now known as an Enforcer that is nothing less then a new persona of Judge Dredd, a Rogue who is a master of planning those exotic heists and missions with a the style and skill of something from Mission: Impossible or Oceans 11-13, a healer who is a corporate shill and suit who can heal the party, sure, but all the legal contracts and wavers must be signed first. The quest to slay the dragon isn’t now about something so simple, it’s about working against or with the machine of modernization and getting one’s slice of the pie. The point is that this world opens up role playing aspects in unique and exciting new ways that we have come to love and hopefully you will too.

Over the years the Dark Sun Future has adapted with the various editions of D&D rules and Dylan and I have rewritten it to use our own now forgotten home brew system. It’s been half a decade since we last sought the Dragon but we’ve blown the dust off the old notebooks, dug up old files from 3.5 floppies and started totally new brainstorming even more up to date ideas for Athas 2.0 as we bring it now to Pathfinder.

(Additional thoughts by Dylan, the “D” of “R/D Tabletop Games”)

1995? Really? Man, we are Olds. As Randy mentioned, this game has gone through many iterations mainly due to advancements in tech. Of course, the changes from 2nd Ed to 3rd to 3.5 to Pathfinder also changed it, but many of the rules and ideas carried over (or were cannibalized from other “modern” RPGs). Like the idea of faxing Explosive Runes to someone has changed to Explosive Emojis, because who faxes anymore? Nonetheless, this has been a passion project for…sheesh…20 years.

So why not play Rifts? Well, preference really (in this case). To me Palladium’s system is a bit clunky, but mostly it’s the whole MDC thing that really throws it off. No beginning spell or psionic in Rifts does MDC (only higher level spells and powers do), but from level 1, you can get MDC armor (usually included with your class) that almost entirely negates magic, or damaging magic anyway. In this system, magic, psionics, and tech are all on the same level (or use the same rules). So it’s balanced..or as balanced as Pathfinder anyway.

So why not play Shadowrun? Depth of magic and psionics. Sure Shadowrun is a bit more “open ended” since it doesn’t have classes, but there are definite archetypes to build with your skills. And again, this system has more spells and has psionics. Otherwise, we do borrow the “feel” of Shadowrun, but place it on one of my favorite “classic D&D” settings. I mean, I still don’t understand everyone’s fascination with Forgotten Realms. Sure, it’s generic medieval fantasy, but so is Greyhawk or Dragonlance and they still don’t see the popularity that…I’ve gone off and ranted.

All the same, take it or leave it, or heck apply the rules to friggin’ Forgotten Realms, enjoy or world…or a world we heavily modified like a toddler playing SimCity.